Latest Post from One of my other blogs...."And So She Flies.."

May 18, 2013
Heart Of Texas First Annual Fly-In
McGregor Municipal Airport, McGregor, Texas
A few weeks ago, Bob and I attended a monthly breakfast of this chapter of the EAA (Experimental Aircraft Association). I've been hesitant to write about this breakfast meeting experience-
Until now.
After attending the association's first fly-in-I have no qualms about posting my real opinion. I
mean it's just an opinion-everybody has one.
So, we go to the breakfast, which happens once a month at this small airport. We are all gung-ho..ready to join-to jump in and be part of things.
I don't want to be an association basher-- I believe in second chances....
The Fly-In was the second chance.
Anyway, so we go, we join, we are barely greeted. The lady that signed us up spoke more than anyone.  It's obvious that this association has people that have been meeting together
for years. They know each other, joke with each other and work alongside each other.
WE are outsiders.  We remain outsiders.
One sweet lady took the time to talk with me.
No one else even acknowledged our presence.
Gee-Thanks guys.
We are pretty thick skinned though. We walk around, look at the planes. Bob tells me about the different types-it's not a total waste of a morning. I mean after all, blueberry pancakes were involved.
Still, after a few hours, we leave deflated and honestly, wondering why we went.
Yet, we are resolved to stick it out, to go back for the Fly-In.
So we did just that yesterday.
So, this Fly-In is at the same airport. It's a three day event where owners can fly their planes in and attend things like Texas Hold 'Em Poker and FAA Safety Seminars. For kiddos they have flight simulators, crafts and an opportunity to build their own airplane.
Upon arrival to the airport, we spot friends of ours from Waco Flying Service, Aaron and Alisa Dabney. Aaron is the President of the EAA Chapter in Victoria, TX and is a Flight Instructor at Waco Flying Service.  We are so glad they are there. Friendly faces are a wonderful thing.
Alisa, like myself, wants to become a pilot. She flies with Aaron, so has much more experience in the aviation realm than I. Like me, she has the fear of landing a plane on her own.
I think this is a healthy fear, not a terminal fear.-The type of fear that will keep us on our toes and make us better pilots. 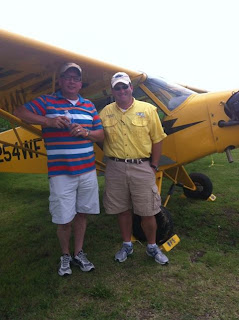 Bob and Aaron by Waco Flying Service's  Legend Cub
For the most part, our day was spent hanging out by the Cub with Aaron and Alisa. Alisa, Bob and I went to the FAA Maintenance Safety Seminar mid-morning.
From this class, I took away a desire to not only purchase my own plane...but to make damned sure it is meticulously maintained.  I'm thinking, "We could build our own plane--and we could maintain it--then we know for certain that there is no electrical tape holding it together on the inside" (Yes, you read correctly--there was a photo of some poor pilots who's maintenance guy had used electrical tape..WOW!)
The Fly-In coordinators expected 300 planes at this event-well, that is just too many digits. The attendance was more like 30.  The event was under advertised and therefore, under attended.
I felt disappointment for the association and for the vendors.
We stayed from about 9 a.m until about 2:30. The peak of activity was around noon when many of the planes flew in.
I really wish I had an abundance of really cool things to write about this event. I'm pulling every morsel of info from my brain to log here.
There is just not a lot to share.
I hope that by next year's Fly-In  (If there is a next year's Fly-In), Bob and I will be more in the swing of the things and will be able to help out.
We are still thick skinned and we will continue to attend.
With some groups, this is the key, just continuing to show up, and eventually becoming accepted.
We have many ideas to amp up this association.
We offered to help with this Fly-In and were turned away.
So-a word to any of you in associations such as EAA-or really, any type of organization with voluntary  membership:
Be nice to new people.  Make them feel welcome and wanted. Open your mouth and talk to them. Ask about their families. Ask about their lives. If people are coming to your organization, there is a reason. They took the time to show up for a reason. Have designated greeters.
Have an agenda. Take a look at your membership.. Are you stuck in a rut? If your membership isn't growing, it's dying.  Are you passing the buck? Thinking you don't have to reach out to new people because someone else is?
I've got news for you, someone else probably ISN'T.
Long ago, in a different life, I learned this working with volunteer organizations.
I know how I want to be treated, so, as a rule of thumb, that's precisely how I treat others.
Now, back to the real issue at hand--becoming a pilot.
I'm still daunted by the task. I wake in the middle of the night and envision myself in a cockpit alone.
I'm in awe of other women that have become pilots. They are like super-heroes in my mind.
They are fearless, warriors of the air.
I'm still here, in basic training, feeling like my ambition is in a holding pattern.
Forever waiting for my brain to cooperate with the rest of my body.
Soon, I will have an initial flight.
I've been waiting to be able to get a medical certificate-which may not happen for awhile.
So, I am going to start as a Sport Pilot.
At least that gets me started.
Requirements from the FAA are as follows:

A Medical or U.S. Driver’s License

(Other than Balloon or Glider)

A Person Using a Current and Valid U.S. Driver’s License Must


A Person Using a Valid Medical or Current and Valid U.S. Driver’s License Must
􀂉 Not know or have reason to know of any medical condition that would make that person unable to operate a Light-Sport Aircraft in a safe manner

Yes, I have to be careful. I have to really listen to my body and my brain.
I'm just tired of waiting. Tired of being a slave to my constricted cranium.
Yesterday, when talking with Alisa, we talked about hot air balloons. She and I both want to go up in one. We were talking about how Aaron  will fly anything but will not get in a hot air balloon.
I asked him about this. His reason? True to his gender, he answered, "I want to be in control".
I have pondered his response several times since.
I think about my brain not cooperating.
I want to be in control, too.
Sometimes it's like I'm floating around in a hot air balloon. I'm at the mercy of every wind gust (or in my case, every fluctuation of CSF pressure).
I want to be in control, too.
So, instead of  giving in to this hot air balloon of a brain, I'll take control and keep pushing forward toward my goal of becoming a pilot.
I will, somehow, take control and I will learn to fly.
I wonder what is more difficult-willfully giving up control-or willfully regaining control?
Can this be compared to wrestling your brain back in to control after the brain in question ripped that control out from under you?
Many points to ponder and discuss as I mentally and physically prepare for pilotship (is that a word?).
Isn't control (or the lack thereof) is an illusion we buy in to or give in to?
Control is abstract, intangible and theoretical.
Yet, somehow, we put it on an altar and worship it.
We seek it more than anything else in life.
Control of our lives, our bodies, our finances, our relationships, our abilities.
All I really want here is to be "in control" enough to sit at the "controls" of an airplane and "control" it's movements enough to safely leave the ground, soar through the air and return, in "control".
Maybe the key to appreciating "control" is to lose it.
Maybe that's the reason I have Chiari Malformation Type 1.
Or maybe, just maybe...there is no deeper meaning.
I'm just trying to justify telling Aaron he should just get in a freaking balloon.

Posted by Michele Collum at 9:26 AM